I hope you are keeping safe and well as we continue to deal with the ongoing challenges related to the COVID-19 pandemic.

I am reporting on the results of our Annual General Meeting (AGM), which was held virtually on September 26th, and to provide you with an update on a number of exciting developments as well as plans for this coming year. Hopefully, next year’s AGM can be a physical meeting at a heritage site.

Bob is a life-long and active supporter of the public transit industry. He has a keen interest in Canadian public transit history and heritage, having visited Canada many times, and is a long-time member of CTHF since 1995. He will be our United States liaison and establish linkages with U.S. transit history associations to promote and further the reach of CTHF in the United States.

Ashton has been a member of the Foundation for over 8 years. Most notably, Ashton contributed to the re-design and set up of CTHF’s current website and online store, and continues to provide web-hosting support to the Foundation. He has participated in many CTHF charters and events including staffing the CTHF display at the November 2019 CUTA conference in Calgary.

The Committee believes that Bob and Ashton will bring a wealth of experience and excitement to the Board. Please join me in welcoming them!

Trevor Parkins-Sciberras has advised that he wishes to concentrate on his other interests and has resigned from the Board. We thank Trevor for his assistance with the website and for initiating CTHF’s Facebook page.

Earlier this year, we also were disappointed to accept the resignation of Gordon Nevison, Vice President and a Founding Director of CTHF. A big thank you to Gordon for his 25+ years of valuable service to the Foundation!

Accomplishments Over Past Year

We started out the year with optimism, as we continued to implement our current Strategic Plan initiatives. However, much of that changed with the onset of the COVID-19 pandemic. We were hampered in our efforts to access our archives to work on them, to continue to broaden our transit industry contacts, and to hold charters and other events. 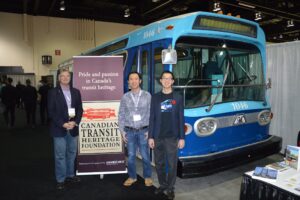 On a more positive note, and despite these challenges, at the AGM I was pleased to report that we have been able to achieve a number of accomplishments over the past year including:

Focus for the Next Year

For the forthcoming year, we will focus on the following initiatives:

It has been several years since we have increased our membership fees, despite continuing annual increases in costs. In particular, Canada Post rates, which are a significant cost to CTHF, have had several increases in recent years. Results of the member survey conducted in March indicate that over 90% of respondents would support this move.

We trust you will support a modest increase in the annual membership fee to $40.00 from the current $35.00, effective for renewals which are scheduled to occur after January 1st, 2021.

In closing, I believe we have had another successful year and look forward to the coming year. Thanks to all of our members and industry participants for your continued support of the mission and activities of CTHF. We’ll be in touch with you again in the future with further updates.

Your ticket for the: Directors’ Meeting and AGM Results